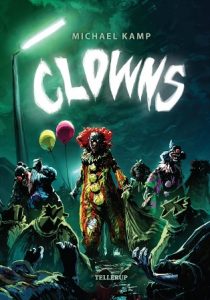 The creepy clown epidemic began when I was 12 years old.
Creepy clowns roamed neighborhoods at night, terrifying the population. At first it was only in the U.S.
Soon it spread, turning into a global craze.
The wave of clown sightings even reached all the way to Denmark.
Every day, the papers ran stories about clowns scaring people.
Of course, the vast majority of creepy clowns were just pranksters in costumes.
But not all of them.
Not in Ullerup.

Finally…
My debut into the English market is here with the YA Horror story Clowns.
The story follow Oscar who is having a really bad night, when a horde of creepy clowns descend on his village.

“Clowns by Michael Kamp reminded me of a young adult version of IT, the film that turned me against clowns for life!
I must say that this is a really well-written book, a bit on the descriptive side so, if you don’t want horrible visions in your mind, don’t read it!
Although it is only a short story, Michael Kamp has managed to include quite a lot; we got the backstory quite neatly, along with the character development, which was good.
It is a little on the gory side, but that doesn’t detract from the story and the unique plot line. I didn’t like clowns before and I definitely still don’t, but for a younger adult who likes a good horror story that they can read in one sitting, this is ideal.
I liked the fact that Michael Kamp explained how things were done in Denmark at the end and how it tied in with his story – a few interesting facts there.”

First review is in from Bloody Good Horror Books.

We’ve never had a five star book come across our desks, so it is my absolute pleasure to praise Kamp and give Bloody Good Horror Books its first five star review.